German skier, Lena Stoffel is renowned for being pretty darn good in any skiing terrain – from speeding down slalom courses, to ripping rails, as well as her flair for freeriding.

She started riding super young (both her parents are ski instructors) and excelled in the alpine ski racing scene, winning the German Junior Championships in slalom aged 17.

After leaving behind the gates, she focused on her favourite aspect of the sport: freeriding. She’s competed in the X-Games and the Nine Queens (the biggest freestyle event in the world for female freeskiers and snowboarders). Yet, after two serious knee injuries, Stoffel was sadly forced to give up her Olympic dream.

Her latest edit from Japan was released today (prepare for some serious pow envy) and we caught up with the lovely lady herself to quiz her on all things skiing and inspiring girls to get out and explore. 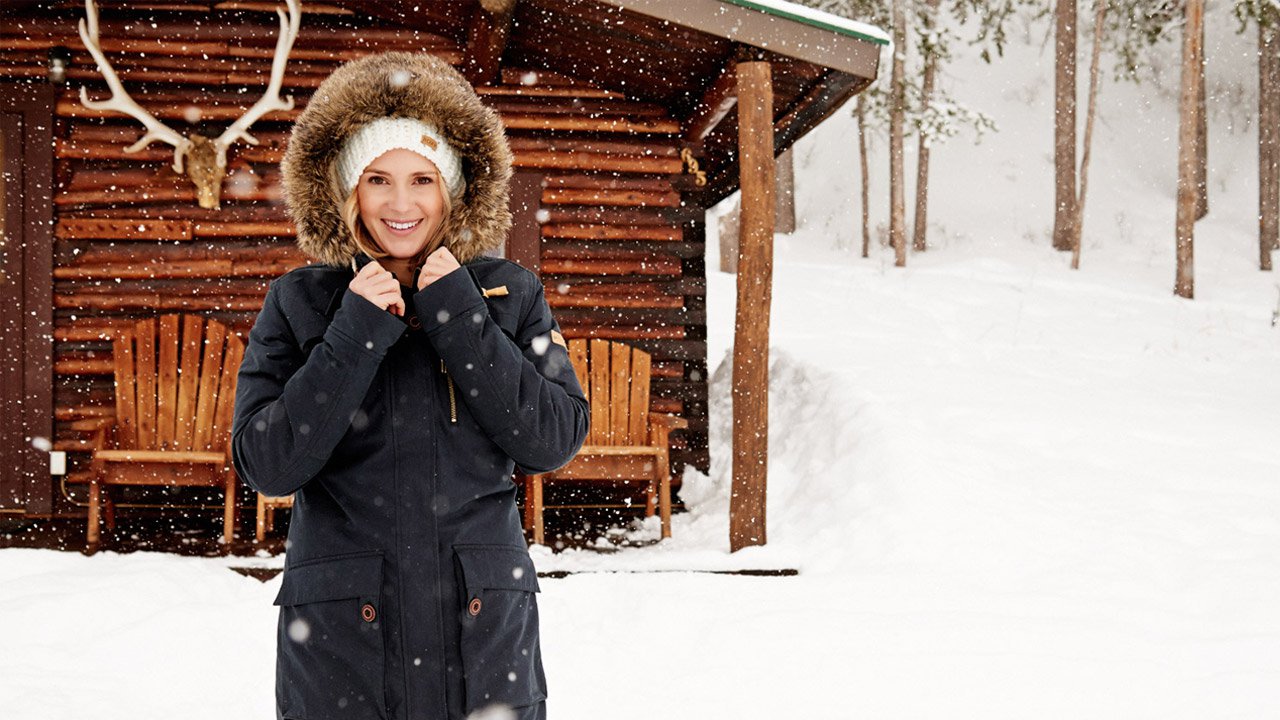 SS: So Lena, tell us about your new edit in Japan? How did it come about, and what was the driving passion behind it?

LS: My new edit filmed in Japan was a totally spontaneous adventure. Aaron [Jamieson] invited me to come on a magazine photo story trip. I asked him that if the conditions were good, maybe we could film a little bit with a gimbal and a GoPro to do follow cams.

It turned out that from day one, we had amazing conditions with deep snow. In fact, the whole month of March it kept snowing, and after the snowfall we had a couple of clear days in-between. So Kamui Mintara was a two man mission: Aaron filmed and photographed, and I was the athlete.

The driving passion for me is just how I feel in Japan, in Hokkaido. I fell in love with this place, the culture, the people, the snow and just the whole vibe. It’s a really calm place and for me, this calmness is contagious. 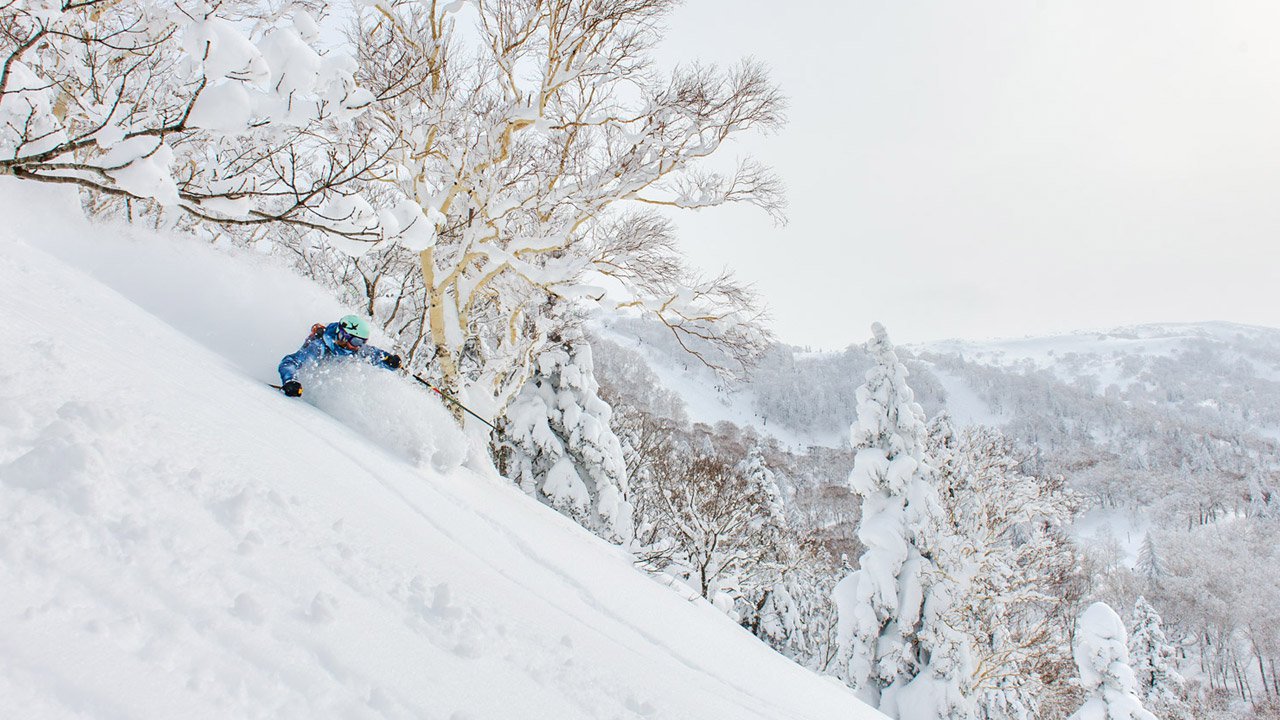 SS: It looks incredible out there! You’re both a fan of the mountains and the ocean – as a skier and a surfer, what do you love about each sport individually?

LS: I love nature. In skiing, it’s the cold, white mountains and the air – which is so fresh and clear. I grew up skiing so this is the sport I’m really good at and I can totally express myself with my skiing. I am in the flow, I love the speed, I love the snow and I love to share this with friends and family.

In surfing, I love the ocean, and the feeling of floating and riding the wave. I love just being in the water. All the colours and lights are amazing in the mountains and the ocean.

SS: So, where is your dream place to ride on the snow?

LS: I think it is Japan. At home it can be amazing too – fingers crossed it’s going to be a good winter in the Alps. I haven’t explored Canada yet, so this is definitely on the list! 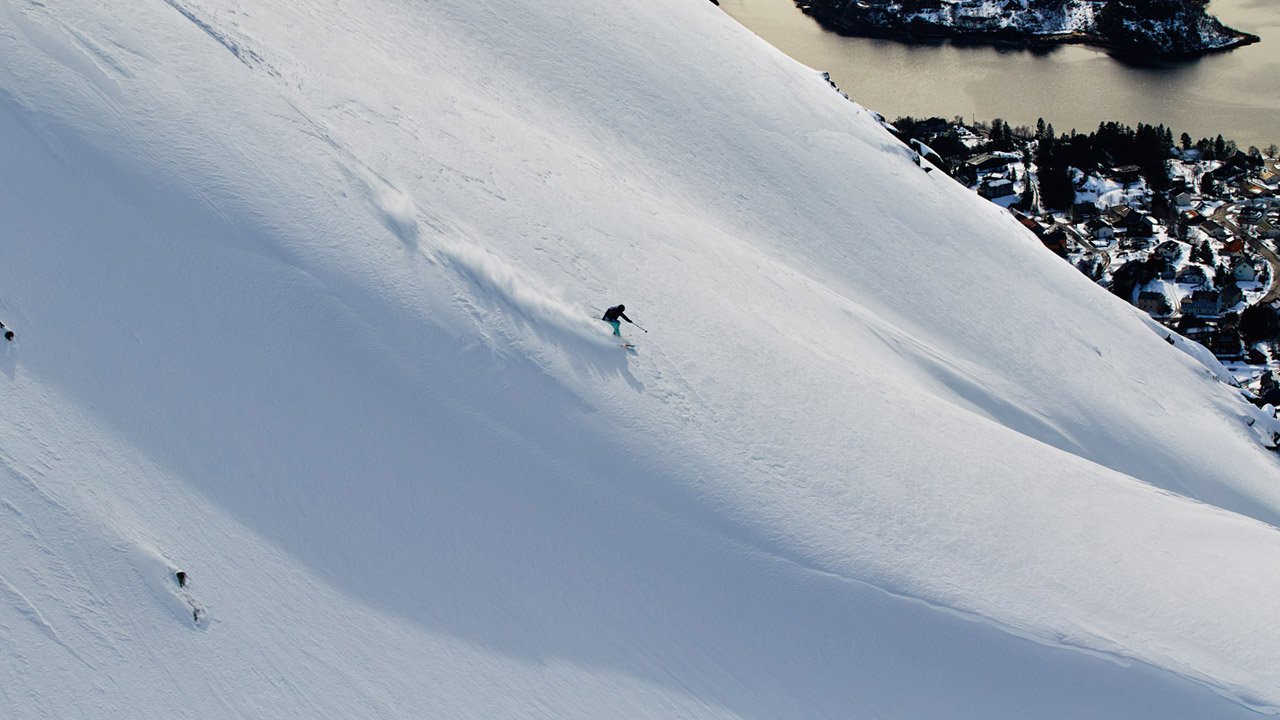 SS: What are the biggest obstacles being a female competitive skier? Do you face a lot of sexism within the industry?

LS: That’s an important question and quite hard to answer I think.

I am not competing anymore, but what I experienced when I did compete is that it’s just really hard for girls to get recognition in the sport – plus, just to be able to do the sport I feel girls get less support.

For example the prize money was way lower for girls than for the boys when I competed. Added to this, competing on the same course as boys was often a challenge because we couldn’t get enough speed sometimes for the jumps because we physically weigh less than the boys.

Now I’m doing film and photo projects, and actually Aline Bock and I – we’ve been successful with two of our short movies about skiing, snowboarding , surfing and just adventures.

We’ve had passionate ideas which we made a reality, but it’s not easy. All the large production companies who still produce the biggest movies in the sports mainly have male athletes in the movies. Only a few girls make it in sometimes. So if you wanna film and produce movies – you basically have to do it yourself. That entails producing, organising, and distributing it yourself.

There have been very few who have made girls-only movies which I think is really amazing. For example “Shades of Winter“ and “Full Moon” productions who show only women skiing and snowboarding – but it’s hard to get support from the big brands and fund projects like that. Ultimately, we all have to stick together and support each other.

I was at the IF3 [International Freeski Film Festival] in London with “Kamui Mintara”, and it’s been so well received by the audience there. It made me proud and happy that many girls came to me after the screening and actually talked to me how much they loved it and to keep doing what I do because it’s inspiring.

It felt so good and I am really thankful for what I am able to do and happy that I can inspire other girls to shred! 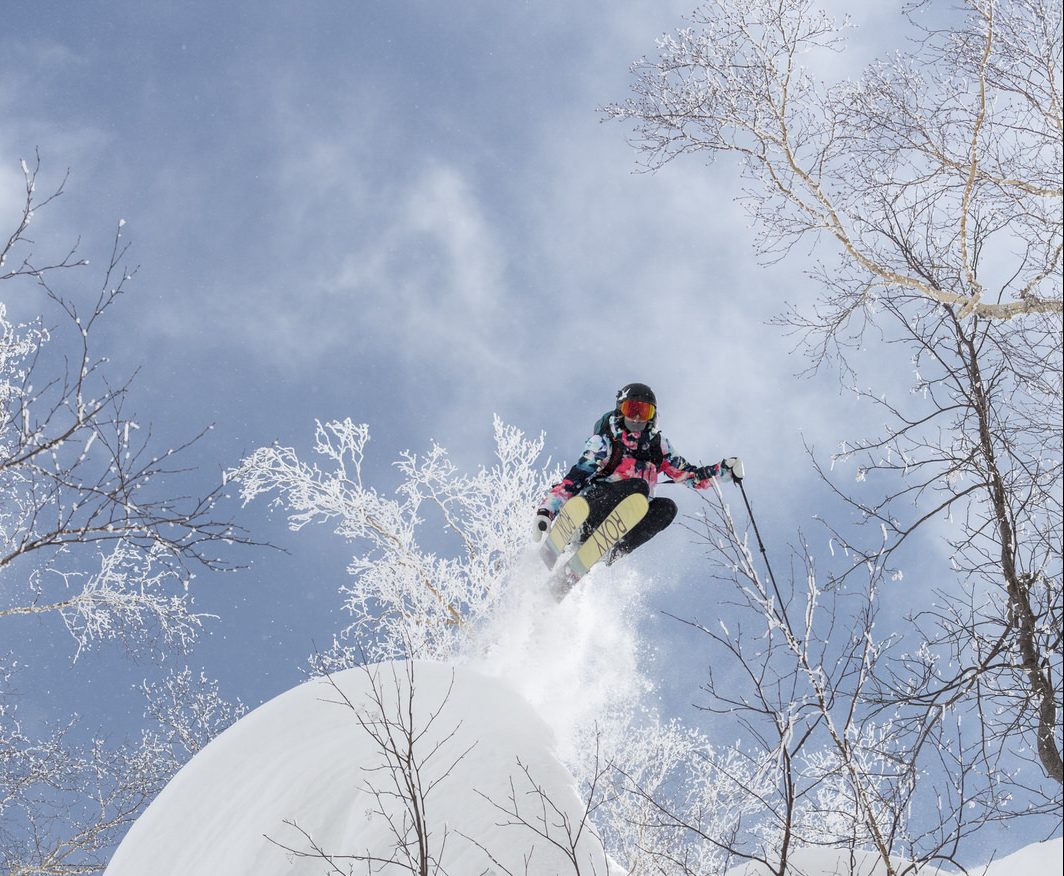 SS: As you spend so much time in the mountains, can you tell us your favourite piece of tech gear?

LS: I love the Gore Tex Outerwear Roxy does. It’s light, warm and really functional. Plus, it looks good!

SS: Where will you spend this winter season?

LS: I will hopefully spend a part of the winter in the Alps cruising around in an RV and explore new places, but I will definitely go back to Japan as well.

SS: Have you ever had any super sketchy moments on the mountains – such as avalanche near-misses?

LS: Actually I never had a close call – and I am super happy about that.

I am always preparing and training with my gear and I try to only be in the mountains with people I can trust. We talk about every situation in every moment to make the right decisions. It’s really important for me.

SS: I know you had two nasty knee injuries so I was wondering if you had any inspirational tips for injured skiers out there?

LS: Hmm, thats a hard one…I guess what you have to know is, that it takes the time it takes.

If you do your best and you train and you go to physio and you eat healthy you’ll be back – maybe even stronger than before.

You learn a lot about your body and this gives you strength in the end.

SS: That’s great advice for any injured snow addicts out there. Finally, what’s up next after the Japan edit?

LS: I am on to something, but the idea is not final so I haven’t really talked about it yet…

The idea is very exciting for me – bringing challenges and new things to learn. I’ll definitely be embracing skiing, nature and travelling. Watch out!

SS: Sounds intriguing! We hope you have a wonderful winter season and looking forward to seeing your next project! 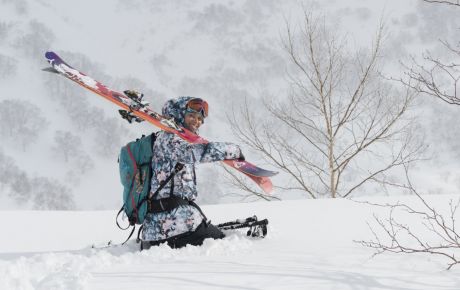 Winterfox – A Journey Through Winter

“Winterfox”, a short movie with a unique perspective on Hokkaidos snowy living produced, filmed and edited by Lena Stoffel. 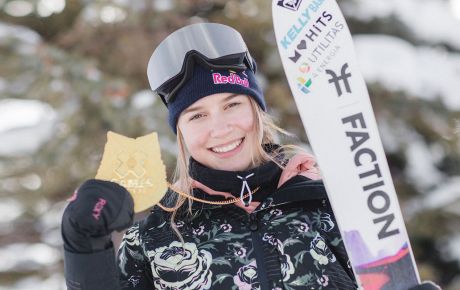 After missing the 2018 games due to injury, Kelly is back at the 2019 XGames, Aspen and makes history by winning three medals in the one event! 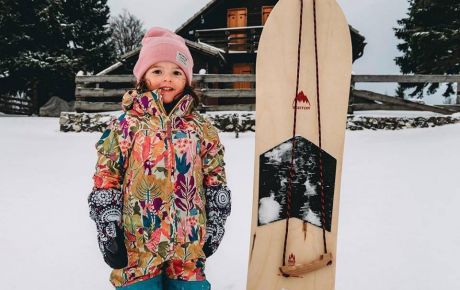 We Take A Stand For Women – Burton

There was a time when we, as snowboarders, had to fight for our place on the mountain. Now we’re bringing that same spirit of activism to women’s rights. 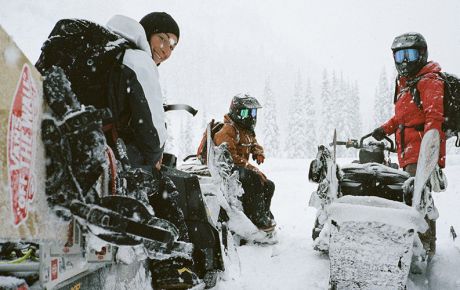 Listen to the Eyes – A Vans Women Snowboarding Team Film 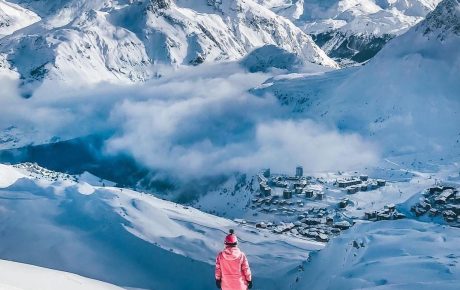 More Snow Expected In The Alps This Week

Time to treat yourself to a late Christmas present and get out to the mountains.

Sponsored articles are advertisement placements. But while they are paid for, we only accept companies or products that adhere to the KiteSista guidelines of suitability for our audience. Basically, we only accept advertisers who we've already written about or would write about naturally.

If you'd like to potentially get your product or service included in our Sponsored spot, please contact our advertising team.

Congratulations, you have been entered into the competition, Good Luck.

Why not share this page using the buttons on the left or below to tell your friends about it so they can have a chance too.

Your vote has been registered. Have you voted in all of the awards?